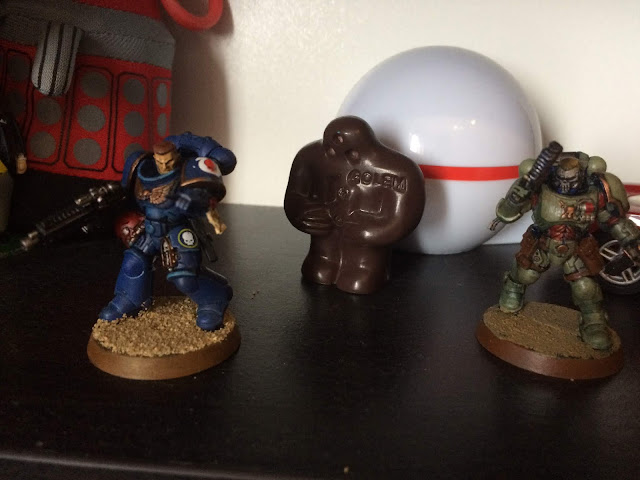 Out of a desire to have a 5-man Reiver Squad and bring my second squad of Intercessors to 5, I picked up two more easy-to-build kits. Since this means I had Sergeants to spare, I decided to try out some things I hadn't done before. Like paint an Ultramarine!

First, we have the Reiver Sergeant. I picked these up in a Warhammer store in Illinois while I was visiting Escape so I had something to paint while they finally got round to the Orks I got them for their birthday. Paint-wise I had access to the Death Guard paint set, plus some Waaaagh! Flesh and a pot of Mephiston Red I picked up so I had something for contrast. As such, have a Reiver Sergeant of the, umm... Mortis Sentinels?

This was my first paint job in a while, so excuse it looking a little rough around the edges. This was also my first time using texture paint, specifically Armageddon Dust. The base colour is Mournfang Brown. Contrast with the Ultramarines Sergeant down below, which is based with the old Bestial Brown and modelling sand. 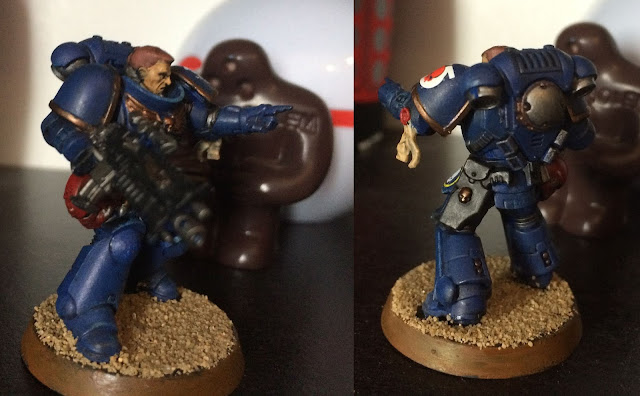 The sand grains are bigger than the dust flecks from the texture paint, which does a better job of masking the base slot, but on the other hand the dust doesn't fall off. I prefer the look of the sand to be honest, but at least I don't have to pick dust particles off with a texture paint.

I picked up the Ultramarines Paint Set so I had what the model needed re. a good blue, which I've never really had. I attempted some edge highlighting with the old Ice Blue paint, which seems to have come out OK but isn't really visible here. This is also the first model I've actually applied transfers to properly! The first one I attempted (which would have gone on the right knee) didn't work out. The other two are good, though I really should have painted white where the eyes on the skull were meant to go whoooops.

These two aren't going in any army, they're purely for display. There to remind me I can still paint. Which means I should really return to making up that Doom Legion patrol I'm trying to do...
40k finished stuff painting primaris space marines